Aim of rhinoplasty is to improve the function and appearance of the nose. 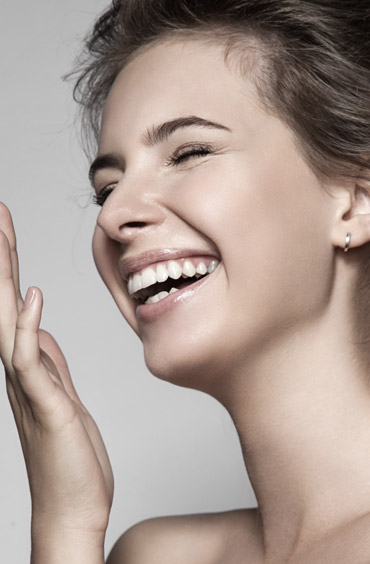 Depending on what is the main problem that you experience with your nose, rhinoplasty surgery may concentrate on one aspect more than the other.

If your main concern is with the appearance of your nose then rhinoplasty surgery will be directed at the aesthetics of it, however, the function of the nose (breathing freely) will also be protected by the way the rhinoplasty procedure is performed and often patients state that their breathing is improved following an aesthetic improvement to their nasal appearance.

If you have a mainly functional problem with your nose (most commonly due to trauma), then rhinoplasty surgery will be directed towards improving airflow by straightening and strengthening the internal framework of the nose. If trauma has been the cause of the poor airflow and there is an associated visual deformity (such as the nose being crooked or having a visible hump) then this can be corrected too at the same time.

Personalised care at a hospital close to you with a comprehensive five-year structured follow-up programme and fully BAAPS and BAPRAS accredited surgeon. Prices from £7000.

Optimal results can take 12 months when all swelling of the delicate tissues of the nose have subsided.

What does a nose job involve?

A nose job or rhinoplasty surgery is always performed under general anaesthesia. There are two types of rhinoplasty – open (where there is a small scar on the columella of the nose in addition to ones on the inside, and this technique is used to allow direct visualisation of the whole of the internal framework of the nose) and closed (where the scars are placed only on the inside of the nose and the amount of modification that can be done to the shape of the nose, particularly the tip, is more limited). Both types of approach usually require the bone and cartilage on the top of the nose to be modified and both usually require the nasal bones to be fractured to allow the desired new shape of the nose to be achieved. The individual operative plan is tailor-made depending on each patient’s specific problems and requirements and this is discussed in detail in at least two pre-operative consults. You will stay in hospital overnight and go home the following morning.

How will a nose job surgery my breathing?

The aim of rhinoplasty surgery is always to improve breathing. In the most simple form, it may involve removing some of the cartilage from the nose (which makes the airway from each nostril bigger on the inside), through to making sophisticated modifications to the nasal skeleton.

How quickly will I recover from a nose job?

You will wake up after your procedure with packs in either nostril and with a splint over the bridge of your nose. This will be held in place by Elastoplast tape (or an alternative if you are allergic to this). The following morning after having been reviewed by Mr MacQuillan, you will be discharged home with painkillers and any necessary additional medication.

It is not uncommon for patients to get swelling around the eyes following rhinoplasty surgery and this usually increases in severity for 48 hours following the operation (this can be minimised by sleeping in an upright position for the first week post-op). Additionally, it is quite common to get bruising around both eyes, this can last for up to two weeks, though normally resolves sooner.

You will notice some crusting around both nostrils for the first week to two weeks from the incision lines inside the nose, this is due to dried blood and is best treated by cleaning several times a day with clean earbuds and cooled boiled water. You will be given some ointment to dress the incisions with.

Your splint will normally be removed one week following a rhinoplasty procedure and you will need to apply taping to your nose at night for a further three weeks to help minimise swelling. For the first two weeks following the operation, you need to avoid blowing your nose, bending over to pick up objects (for example, from the floor), refrain from lifting heavy objects and avoid strenuous exercise. From two weeks you can gradually increase daily activities but should avoid anything that is likely to result in a direct blow to your nose (rugby, football, horse riding, etc) for at least six weeks (and preferably avoid direct trauma to the nose on a permanent basis).

What can go wrong in a nose job operation?

The commonest problem encountered after a rhinoplasty procedure is a nose bleed. The nose has a very rich blood supply and it is not uncommon for a scab to become dislodged during the healing process which can cause a nose bleed. This can be very alarming for the person affected but rarely results in a serious problem. If you do suffer from a nose bleed get in contact with the team and you will be reviewed straight away.

Another common problem that happens post-op is the splint falling off. The chances of this are minimised are by the Elastoplast taping but if this does happen please try to save the splint and contact the team directly. The splint will help protect your nose and importantly helps to minimise the swelling in the nose.

Infections following rhinoplasty surgery are rare due to the rich blood supply of the nose – but should you be worried you are developing one, please contact the team immediately and you will be reviewed straight away.

During your consultation, you will have a detailed discussion of all potential complications and be given the opportunity to ask as many questions as you need.

Is it possible to straighten a crooked nose after it has been broken?

Yes, it is possible to straighten even badly deformed noses following trauma. Depending on how severe the damage, different strategies can be employed to ensure the internal framework is straightened and strengthened so that the airflow is corrected in both nostrils and the shape of the nose is restored. 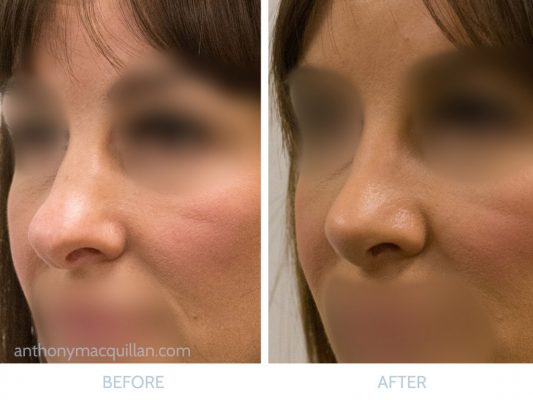 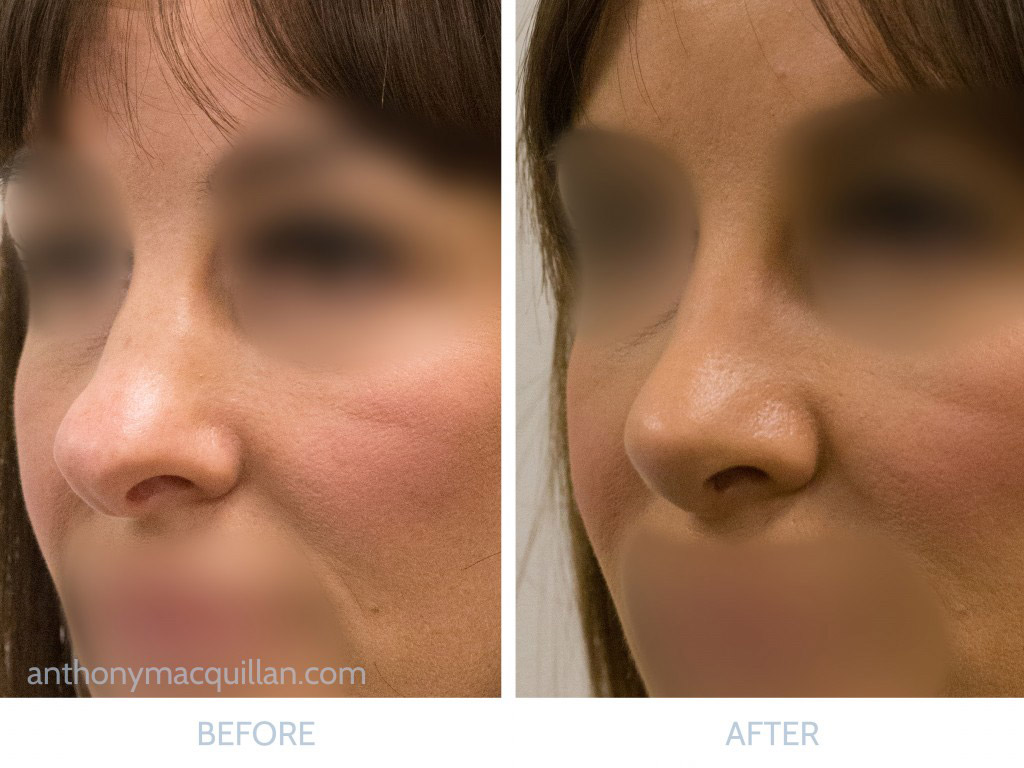 Discover nose reshaping in more detail through the articles below…

Rhinoplasty is one of the oldest documented cosmetic surgery procedures and still remains one of the most requested ops worldwide. However, the way in which it can be performed has changed dramatically over the years.

While surgery was once the only option available to patients, newer, non-invasive techniques have since been introduced and non-surgical nose reshaping is starting to rival surgical rhinoplasty in popularity due to its non-invasive nature and effective results. The question is, how does a non-surgical nose reshaping procedure differ from a surgical rhinoplasty?

Here, you’ll discover the differences between the two and the benefits a non-surgical nose reshaping procedure provides. We’ll also briefly look at what the future of nose reshaping holds.

What is the difference between non-surgical and surgical rhinoplasty?

The main difference between a non-surgical and a surgical rhinoplasty is the invasiveness of the procedure.

A non-surgical nose reshaping procedure doesn’t require an incision; instead, it uses an injectable dermal filler to alter the nose’s appearance. It can be used to either smooth out bumps in the nose or to make it appear slimmer and more refined. It’s a temporary type of nose job, requiring additional treatments to maintain the results.

A surgical rhinoplasty is a lot more complex. Incisions will be made before the plastic surgeon can access the cartilage and bone structure of the nose. It can be carried out using either an open method or a closed method, depending upon how complex the procedure is. This is a permanent type of nose job, with a much longer recovery process than a non-surgical rhinoplasty.

The benefits of non-surgical nose reshaping

Non-surgical nose reshaping does offer numerous advantages, including minimal risks and complications, a shorter recovery time, no requirement for general anaesthetic and can be great for those wanting to try out a nose job before going under the knife.

However, there are numerous limitations to what can be achieved and it’s important to be aware of these. Firstly, it’s not a permanent procedure and the hyaluronic acid dermal fillers used can be absorbed by the body in as little as six months. Dermal fillers can fill in a depression or irregularity but can’t reduce the size of the nose, elevate a droopy tip, or narrow a too wide nose or bulbous tip. It also can’t address any functional or structural issues that are affecting breathing.

What does the future of rhinoplasty hold?

The way in which rhinoplasty is carried out today has changed significantly since the procedure was first introduced. Developments continue to be made, with the latest including a five-minute nose job which requires no surgery or even needles.

Known as Electromechanical reshaping, an electric current passes through the cartilage in the nose, breaking it down so it can be reshaped. As it only works on cartilage, only the tip of the patient’s nose can be able to be targeted. However, it is still an exciting development.

This is certainly a potential future treatment, though it is unlikely to be introduced onto the market any time soon. Human trials still need to be conducted, but it’s a good sign of what’s to come for patients in the rhinoplasty field.

Both surgical and non-surgical nose reshaping can produce fantastic results. The procedure that’s right for you will depend upon the extent of the work required.