Personalised care at a hospital close to you with a comprehensive five-year structured follow-up programme and fully BAAPS and BAPRAS accredited surgeon.

Every breast implant develops a layer of tissue (or capsule) around it. It is the body’s way of trying to isolate the implant which it sees as a foreign body. This is entirely normal and it is this reaction to foreign material that allows hip replacements to work so well (by forming a new joint capsule).

Normally the process of capsule formation goes unnoticed by both patient and doctor and no action is required. Occasionally, however, problems can arise where the capsule starts to become thickened and contracts resulting in a change in the shape of the implant, visible rippling of the skin and even pain due to the forces exerted on the soft tissues by the capsule.

Results depend on techniques used and complexity and it can take a year before final results are visible.

Surgery involves removing the current implants and carefully examining the inside of the capsule. If it is not too thick or hardened, it can be scored or hatched so that it stretches without a problem and new implants can then be inserted. However, if the capsule is very distorted and hardened, it is necessary to remove it completely prior to inserting the new implants.

Capsular contracture surgery is more involved and complex than breast implant exchange and the biggest problem that is faced is bleeding into the implant pocket post-operatively. This is because when scar tissue is cut (and the capsule is essentially scar tissue) the blood vessels that would normally retract and seal off when cut are prevented from doing so and held open by the scar tissue, increasing the risk of a collection of blood forming around the implant (a haematoma). Mr MacQuillan often uses surgical drains following capsulectomy, in addition to meticulous attention to haemostasis (using electrocautery to seal any bleeding vessels), to minimise the risk of haematoma formation.

How long is the recovery period?

After surgery, you can undertake light activities (including light aerobic exercise) once you feel comfortable, and after the first two weeks, you can start to lift everyday objects. It is important not to do upper body weights or rigorous exercise until six weeks following the surgery. Your body will be a good guide as to what you can and can’t manage.

Although the success rate following surgery is high, there is a higher risk of redeveloping capsular contracture if you have had it occur once already. If this were to occur a further release of the contracture could be undertaken together with other potential steps to reduce the risk of recurrence. 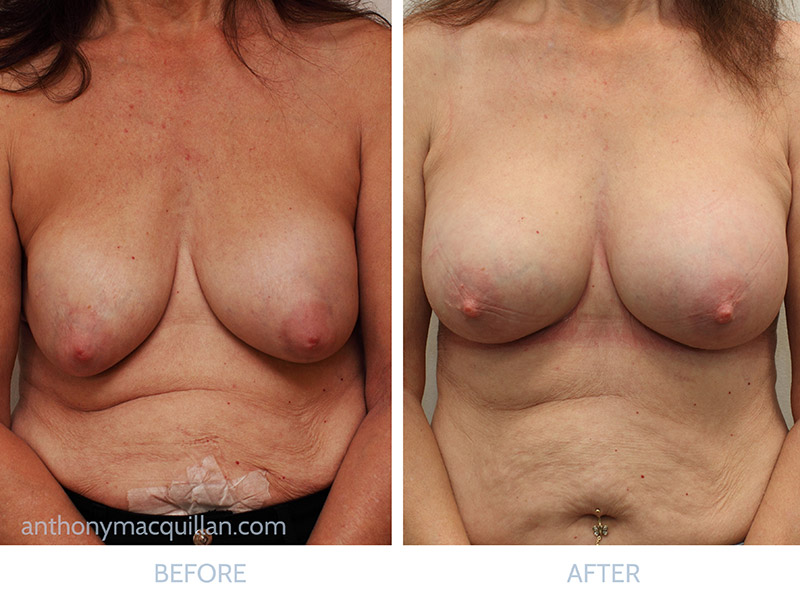 Discover more about capsular contracture surgery in the articles below…

How to prevent capsular contracture

What is capsular contracture and is it possible to avoid it after a breast augmentation?

What is capsular contracture?

After undergoing any type of implant surgery, it is common to develop scar tissue capsules around the implant. It is a part of the healing process, and the tissue basically acts as a barrier to isolate the foreign body, in this case, an implant.

In most cases, this scar tissue is helpful in the breast augmentation recovery process. It helps to keep the implant in place, ensuring natural-looking results. However, in some patients, the scar tissue capsule becomes harder than it should, causing it to contract against the implant.

When capsular contracture occurs, it can alter the aesthetics of the breasts, and occasionally cause pain. According to research, one in six patients will experience some level of Capsular contracture after undergoing breast augmentation.

What causes the condition?

The exact cause of capsular contracture isn’t known. Some experts believe there may be a genetic link, while others think it could be down to a type of bacteria which is introduced into the breast cavity during the surgery. The bacteria can lead to a mild infection, where excess fibrous tissue is created before it hardens around the implant.

Whatever the cause, if you do develop capsular contracture, patients do have treatment options available to rectify the condition.

How can you avoid capsular contracture?

As the exact cause of capsular contracture isn’t known, and as it does appear to occur randomly, preventing the condition isn’t always possible. That being said, there are ways to lower the risks.

Tissue trauma and bleeding during the procedure are known to increase the risk of the condition. Therefore, making sure you choose an experienced and highly skilled surgeon is of paramount importance. If bleeding does occur, the surgeon will need to remove the blood before closing. If they don’t, the old blood can cause scar tissue to harden.

Some studies have shown giving the patient antibiotics prior to breast augmentation can reduce the risk of bacterial infection. Patients should also ask the surgeon what steps they will take to prevent the risk of capsular contracture caused by infection.

Surgeons should also avoid taking the implant out numerous times in order to position it. This will cause excessive trauma to the surrounding tissue, greatly increasing the risk of capsular contraction. There is also evidence to suggest that the placement of the implants is important in prevention. Implants which are placed under the muscle have shown to be a lesser risk for the development of the condition.

Capsular contracture is a relatively common problem faced by breast augmentation patients. While there are ways to reduce the risks, avoiding the condition completely may not always be possible. It is a good idea to talk to your cosmetic surgeon about the risks and what are your options if you do develop capsular contracture.

If capsular contracture does occur, Anthony can perform a surgical procedure known as a capsulectomy that will remove the implant and its casing and restore a more pleasing, natural shape to the breast. Performed under a general anaesthetic, an incision will be made in the most optimal place possible, either through your previous incision or in a position that any scarring will be well hidden.

Scar tissue will be released, and the capsule and implant removed. Most patients will then have a new implant placed in the existing pocket or a new pocket made, and the incision is then closed with incisions. Recovery and possible complications are the same as after your initial breast augmentation procedure. For more information on capsular contracture surgery, call 0117 325 5034 to arrange a consultation.